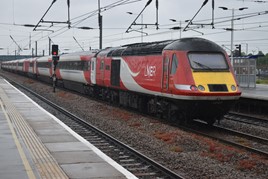 In an interview with RAIL on July 31, at the launch of the first new Scottish diesel-electric hybrid Azuma, LNER Engineering Director John Doughty said HST withdrawals were to start in mid-November.

However, this was dependent upon Network Rail successfully testing and commissioning a sub-station at Bawtry, near Doncaster. This will be carried out from the August Bank Holiday, with its introduction scheduled for October 22.

Doughty explained that once that happens, a lot more Azumas can be introduced, replacing the HSTs.

He said: “We recognise the risk and have done work to see what would happen if we had to move HSTs into next year. The vast majority of the fleet will be Azuma.”

The HSTs would need a derogation to meet accessibility standards, but Doughty said they would only be needed for a few weeks. He said that as well as the sub-station, another risk surrounds the introduction of ten five-car Class 800/2 bi-modes.

Currently 800201-800206 have been released, but there are issues surrounding materials needed for their kitchens, he said. Type acceptance for the trains is expected in the middle of August, but they will enter service at a later date.