IEP use to be decided by operators 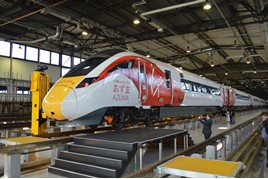 It is the responsibility of franchise bidders to specify how Intercity Express Programme (IEP) trains are used, according to Lords transport spokesman Baroness Sugg.

In a Lords Written Reply to Lord Bradshaw (Liberal Democrat) on December 21, Sugg said: “When procuring the Intercity Express Programme (IEP) trains, the Department for Transport specified the number of train diagrams required rather than the total number of trains. It was for bidders to decide how many trains were needed to deliver those contracted diagrams, whether electric or bi-mode, based on assumptions for the split of diesel and electric mileages.”

Bradshaw wanted to know what assessment Government had made of the difference in availability for IEP trains in service for bi-mode and electric IEPs. Currently Great Western Railway is introducing a fleet of five-car Class 800/0s, with the first entering traffic on October 16 (RAIL 838).

Sugg added: “When making those assessments bidders will have taken into account both the different maintenance needs for electric and bi-mode trains as well as the increased flexibility of having bi-mode trains that are able to fulfil an electric diagram (in the absence of an electric train), but potentially not the other way around.”