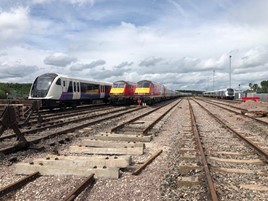 TfL Rail 345023 is the first of several new-build trains to be stored at Harry Needle Railroad Company’s Worksop facility.

The nine-car Aventra arrived at the site on May 29 from Old Dalby, where it had been undergoing testing. It will be joined by classmates as and when their testing is complete, because Bombardier’s Old Oak Common depot is full. Around half of the 70-strong fleet is stored there awaiting testing in the central section of Crossrail. A second set, nine-car 345056, has since moved to Worksop.

HNRC Managing Director Harry Needle told RAIL on May 30 that since he bought the site from DB earlier this year, more than £100,000 had been spent on new fencing and CCTV, while there is a 24-hour guard dog patrol at the site.

He explained that sidings at the site have been extended, and that a new shed is being constructed that will house a ten-tonne overhead crane and a 50-metre pit.

The ‘345’ storage deal has been signed with Bombardier (which built the trains), and Needle suggested other Aventras could be delivered to the site. He said that HNRC will use a newly installed shore supply to power the trains every four weeks and carry out wheel rotations.