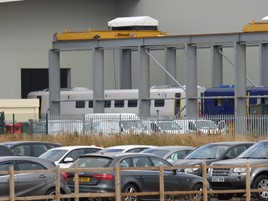 Vehicles for Hitachi’s first LNER Azuma to be assembled at Newton Aycliffe have started to arrive at the County Durham site.

Deliveries for nine-car bi-mode 800102 began on July 9. The bodyshells are fabricated in Kasado (Japan) before being shipped to the UK for assembly.

Hitachi spokesman Nina Harding confirmed that Azuma production would start in July at the site. The trains will enter traffic from next year.