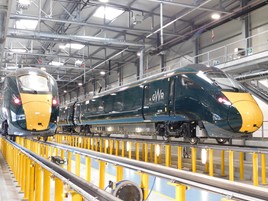 Two pairs of five-car sets will be used, replacing High Speed Trains on the West of England route. These are the first booked service for GWR’s new Hitachi trains west of Taunton, which is currently served by Class 800/0 Intercity Express Trains (IETs).

Two more five-car ‘802/0s’ (802003/004) are on their way from Pistoia (Italy), where Hitachi Rail Europe is building the fleet. However, they are currently unable to travel through France due to strike action by SNCF.