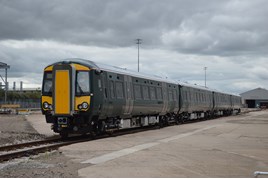 Ahead of the extension of its electrified services to Maidenhead, Great Western Railway has confirmed to RAIL that it needs 18 Electrostars to be able to operate the route.

To date, Bombardier has delivered 19, although by the end of April, not all had been accepted by GWR.

From May 21, the ‘387/1s’ will run from London Paddington to Maidenhead. Currently the electric multiple units run only as far as Hayes & Harlington, but the overhead line electrification has been energised further west, allowing the trains to expand their operations.

As things stand, GWR uses two pairs of four-car Class 387/1s to operate a half-hourly service throughout the day. This began in January after the ‘387s’ were introduced into traffic last September to cover peak-time trains between London and Hayes & Harlington (RAIL 809).

The operator said that it needs 18 EMUs in order to cover those being used for driver training and standby duties, as well as any that are undergoing maintenance. There will be five pairs of Class 387s in passenger use each day.

Introducing Class 387s on the Thames Valley route will allow GWR to cascade its Thames Turbo fleet westwards, with Class 165/166s moving to the Bristol area.