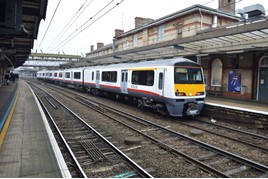 Twenty-two of the 30 Greater Anglia Class 321/3s to be fitted with new traction equipment and refurbished interiors have been completed. However, GA has confirmed it is discussing “problems encountered with the electric multiple units” with their owner Eversholt Rail Group.

The Renatus project is being carried out by Wabtec Rail, Doncaster (where the interiors are refurbished) and Knorr-Bremse Rail Services at Wolverton Works (where the Vossloh Kiepe traction packages are fitted).

In its September stakeholder newsletter, GA said it had encountered problems with the electrical systems, air conditioning and traction motors on the refurbished ‘321’s.

GA said Eversholt has been working to solve the problems, and that initiatives were underway to cure the issues.

One of the key problems with the trains relates to the electrical supply, which is rendering the plug points inoperable, said GA. Engineers have been brought to Ilford from Germany to assess the issues, and look to make repairs as quickly as possible.

A £250,000 refurbishment has been completed at Shrewsbury’s 117-year-old Severn Bridge Junction signal box