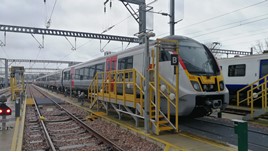 A Greater Anglia Class 720 Aventra electric multiple unit finally arrived at Ilford depot on January 14, around a year after the first trains should have been delivered.

Built by Bombardier, five-car 720509 was moved from Derby Litchurch Lane to Ilford by GB Railfreight, which is contracted to move all 111 Aventras ordered by GA. Angel Trains is funding the EMUs, which were ordered when Abellio won the GA deal in 2016 (RAIL 807).

According to the Greater Anglia franchise agreement, the trains should have been delivered from January 2019 with the first entering traffic in March last year.

But like the Class 710s (which are also Aventras), the Class 720s have been plagued with software faults. And despite two EMUs having been on test at Old Dalby (720501/503), this was the first time a Class 720 had ventured onto the national network.

It will be used for main line testing, with a second set due to join it in mid-February.

Bombardier spokesman Will Tanner told RAIL that more than 160 Class 720 vehicles had been built, meaning that at least 32 of the 89 five-car EMUs have now been completed.

Ian McConnell, Greater Anglia franchise and programme director, said: “It’s fantastic to have one of these new Bombardier trains now on our patch.

“Our test drivers have been very impressed with them. They said it was like going from a bottom of the range small car to a Rolls Royce compared to driving our old trains."

Kevin Tribley, CEO of Angel Trains, said: “The modernisation of Greater Anglia’s network is a major boost to the future of the UK rail industry and the communities this network serves. We are delighted that, through the supply of 665 Class 720 Aventra vehicles, Angel Trains is investing in improved service and experience for passengers in the region."