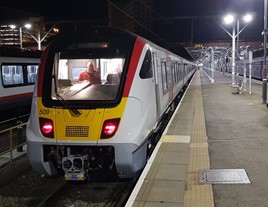 Five-car 720509, one of two so far delivered to Ilford, left its home depot at 2312 on March 16, running to Southend Victoria (one of the routes it will serve). It then operated a Southend-Stratford round trip, before returning to Ilford depot.

No official date for their delayed introduction into traffic has been announced, with GA Franchise and Programmes Director Ian McConnell simply stating: “Once we are fully satisfied the trains are performing as we want them to, we will put them into passenger service, which will be later this year.”

So far, Bombardier has built 46 Class 720s at Derby Litchurch Lane. They have been delayed by software issues relating to their train management systems.