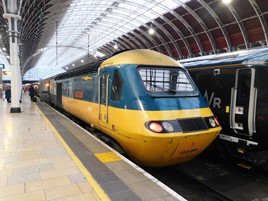 GREAT Western Railway has confirmed that May 18 will be the final day of its long-distance High Speed Train operation.

It is expected that the 1830 London Paddington-Taunton will be the last regular passenger service operated by the full-length HSTs on the route, and this will be extended to Exeter St Davids. Introduced in 1976, HSTs have operated on the Great Western route ever since, but have been replaced by Hitachi-built Class 80x Intercity Express Trains on an ongoing basis since October 2017.

GWR is currently winding down its HST operations as more IETs are delivered, and with only two nine-car Class 802/1s left to arrive in the UK as this issue of RAIL went to press, GWR will soon have all 93 brand-new trains in traffic.

The operator is also planning that tours to commemorate the departure of the HSTs from its long-distance operations, and it’s likely that 43002 Sir Kenneth Grange and 43185 Great Western will be used on these. GWR spokesman Dan Panes also told RAIL that it was possible the final day could also see an HST diagrammed to visit all the destinations they have served since their introduction.