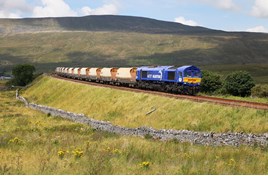 GB Railfreight is on the lookout for new locomotives and wagons, as it prepares to bid for HS2 haulage contracts.

GBRf Managing Director John Smith said it made sense that the operator owns its assets outright where possible, rather than leasing them.

Should GB Railfreight win deals to support HS2 contracts, there is the prospect of using up to 16 trains per day just to move products and materials away from construction sites. These are likely to start in 2019.

Smith confirmed to RAIL that he was interested in 20 Class 60s that have been made available for sale by DB Cargo. He has also spoken with Stadler regarding dual-mode Class 88s, although these would adhere to a Co-Co design rather than the current Bo-Bo design.

Smith also confirmed that ideally he would like more Class 66s, and said that there is a secondary leasing market for the class.

The operator is also to take delivery of new wagons from Romania from next month. These will support biomass operations from a new plant at Lynemouth.

GBRf is also modifying more coal wagons, at a cost of around £18,000 per vehicle, for use in the aggregates markets.