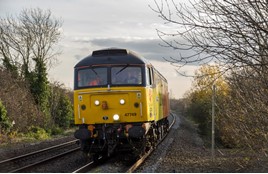 GBRf already hired one ‘47’ for use on its Caledonian Sleeper contract, but the others were little used, especially after Colas lost a Washwood Heath-Boston steel contract.

The purchase of the three ‘47s’ follows GBRf’s acquisition of ten Class 66s from DB Cargo, as the company seeks to grow its fleet to serve new contracts.