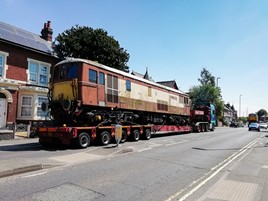 More locomotives have been bought by GB Railfreight, as it looks to expand its fleet following contract wins.

Two Class 73/1s have been bought from LORAM UK, while ten Colas Railfreight Class 60s will also be acquired.

GBRf has also begun moving its newly purchased Class 56s from Leicester to Electro-Motive Diesel’s Longport facility, where many will be fitted with new power units.

The operator has previously suggested it wants to buy locomotives not only for new contracts, but also in preparation for any HS2 contracts it wins. Managing Director John Smith has suggested in the past that HS2 represents the biggest challenge for the freight industry, due to the need to quickly provide resources including locomotives and wagons coupled with the fact that nothing brand new was available immediately off the shelf.

The ex-LORAM electro-diesels are 73101 and 73139. They were acquired in mid-July and moved to Arlington Fleet Services’ Eastleigh Works by road. They left Derby on July 11. The locomotives join 73110, which was bought from preservation last year and which is stored at the site.

DB Cargo (DBC) has put a further 12 Class 60s up for sale, with a deadline of registrations to receive tender documents on January 20.