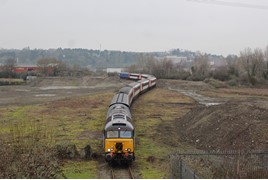 Decisions on the future of stored High Speed Trains will be made in the near future, after the first seven Mk 3s were sent for scrap.

It is also likely that the current East Midlands Railway HST fleet, due for withdrawal at the end of 2019 but which received dispensation to remain in traffic until July 28 this year, will be sent for scrap apart from two power cars donated to the 125Group (43048 and 43089).

Vehicles from former LNER set EC64, owned by Porterbrook and withdrawn last November, were taken to Newport Docks on January 23 for scrapping by Sims Metals. These will be the first HST coaches to be scrapped that had not been written off in an accident.

A Porterbrook spokesman told RAIL that those moved west were a “trial scrapping” but confirmed that discussions needed to be made regarding the other vehicles stored at Long Marston and Laira. He said it was likely that some of those in better condition would be re-used, but that many would be scrapped.