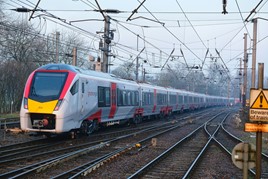 The first four Class 745s to be delivered will be Stansted units, followed by all ten ‘745/0s’ for the Great Eastern Main Line. The latter will be replacing Class 90-hauled Mk 3 sets that must be withdrawn by the end of the year because they do not meet accessibility standards being introduced from January 1 2020.

The Class 745/1s are replacing pairs of four-car Class 379s dating from 2011. Unlike the GE sets, they do not have First Class or a cafe-car, but are fitted with plug and USB sockets, air-conditioning, and fast, free WiFi as well as improved passenger information screens.