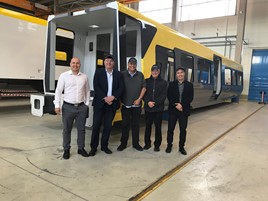 The first Merseyrail Class 777 electric multiple units have entered the final assembly phase ahead of delivery to the UK next year.

The first bodyshells have been moved from Stadler’s Szolnok facility in Hungary, to its Altenrhein facility in Switzerland.

Stadler says the first train will be complete in early-2019 before testing begins.

There they will be fitted with bogies, equipment cases, piping, wiring, flooring, windows, seats and other internal fixtures.

From March next year this work will also take place in Siedlce, Poland. For the first six ‘777s’, a single bodyshell will be sent to Switzerland each week. After that, four bodyshells per week will be sent until the process is finished. Bodies for the first four EMUs will go to Altenrhein. The fifth set will go to Siedlce. After that, they will alternate between the two locations.

Work carried out in Hungary includes machining, welding, sandblasting and anti-corrosion protection, as well as painting.

The first ‘777’ will begin type-testing on the Merseyrail network in the summer and autumn of 2019.