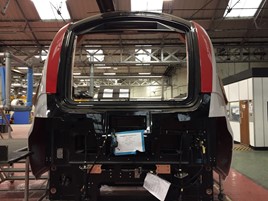 The driver’s cab, carriage sides and windows for the first vehicle were revealed by the operator on February 20.

Bombardier is building 665 vehicles for GA, with the first ‘720’ due for delivery this autumn and due in traffic in March 2019. They will be formed into 22 ten-coach and 89 five-coach EMUs, and used on suburban trains from London Liverpool Street, as well as serving the West Anglia Main Line to Cambridge, Ely and Kings Lynn, and the Great Eastern Main Line to Norwich.

They will have a mixture of 2+2 and 3+2 seating, all of which feature lumbar support.

GA said on February 20: “The exact specification of the interior has not yet been signed off, following a public consultation where over 1,000 people took part.”