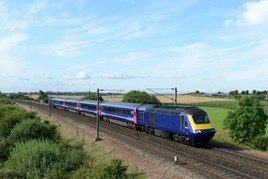 Former GWR 43021 and 43132 took four Mk 3s from Doncaster to Craigentinny on September 1. They will be used for training purposes. The power cars will be retained by SR. They left four Mk 3s at Wabtec Rail, Doncaster, for refurbishment.

Fifty-four HST power cars will move to SR at a rate of around four per month until November 2018.

The Mk 3s moving to Wabtec Rail’s Doncaster facility for will undergo overhaul and refurbishment which includes fitting sliding doors to the coaches to enable them to be in operation beyond January 1 2020.

ScotRail will introduce HSTs on routes serving its seven cities from next year. All will be leased from Angel, with 54 power cars to be refurbished by Wabtec at its Brush Traction Loughborough site, and 121 Mk 3s to pass through Doncaster.

The project will be completed in May 2019, with 17 five-coach and nine four-coach sets entering traffic. They will replace Class 170 diesel multiple units, and will reduce journey times through increased power which means they can accelerate better.

Vapor Stone electric-powered single-leaf doors are being fitted to the Mk 3s. Doors will be interlocked with the power and brake controllers, and there will be a temporary override plunger and permanent isolation switch in the cab.

Hard-to-reach areas between and underneath coach seats may soon be much cleaner, thanks to a new robot designed by a research study group in Scotland.