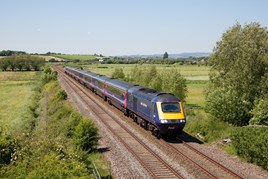 Owned by Angel Trains, these are the first HST vehicles to be withdrawn by GWR, and they are destined for ScotRail. The coaches will be moved to Wabtec Rail’s Doncaster facility for modifications, overhaul and refurbishment which includes fitting plug doors to the coaches to enable them to be in operation beyond January 1 2020.

ScotRail will introduce HSTs on routes serving its seven cities from next year. All will be leased from Angel, with 54 power cars to be refurbished by Wabtec at its Brush Traction Loughborough site, and 121 Mk 3s to pass through Doncaster.

The project will be completed in May 2019, with 17 five-coach and nine four-coach sets entering traffic.