First GWR AT300 Class 802 arrives in UK from Japan 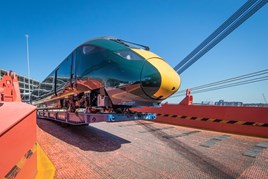 The first AT300 bi-mode for Great Western Railway arrived at Port of Southampton from Japan on June 17.

The five-car Class 802 is the first of 36 trains to be delivered, and is one of three pre-series trains due from the Far East. Hitachi is building the first three trains in Kasado, Japan (two five-car trains and one nine-car train), with the remaining 33 being built by Hitachi Rail Italy in Pistoia (RAIL 828).

It is planned that the AT300s will enter traffic from next summer, running to Penzance, and enabling GWR to withdraw its High Speed Trains. The full fleet must be in the UK by the end of next year, to enable a new timetable to be introduced by the operator from the start of 2019. AT300s will take over all West of England trains from London Paddington from the second week of March 2019.