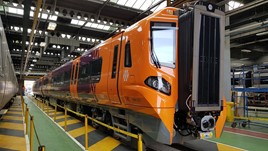 The first complete CAF Class 196 has arrived in the UK for testing and commissioning at Tyseley.

Four-car diesel multiple unit 196101 was built by CAF in its Beasain factory in northern Spain. It had been tested at the Velim test track in the Czech Republic before being moved to the UK.