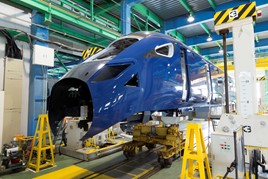 The first Hull Trains Class 802 bodyshell has been completed in Kasado, in Japan.

The open access operator has five five-car bi-modes on order from Hitachi. The bodyshells will be manufactured in Japan before being shipped to Pistoia (Italy), where the trains will be assembled.

They are due to be introduced from December 2019, replacing four five-car Class 180 diesel multiple units. Angel Trains owns the new fleet.

The ‘802s’ will operate on electric power on the East Coast Main Line, before switching to diesel away from the wires. They have a top speed of 125mph on diesel and 140mph on electric, although the maximum speed on the ECML remains 125mph. The ‘802s’ also feature 20% more capacity than the ‘180s’.

“Now that the body of our first Class 802 is complete, we can show passengers a first glimpse of what our new services will look like,” said HT Managing Director Louise Cheeseman.

“These trains will really transform travel from Hull and East Yorkshire to the capital, and we are delighted to see the progress made so far - the images bring the trains to life from the concepts that have been released.”