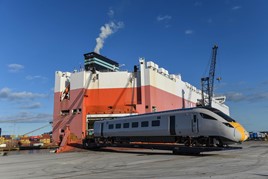 The trains are destined for Virgin Trains East Coast (VTEC). They arrived by ship at Teesport on March 20, and will initially be used for training on-board crew and drivers.

VTEC Azuma Director Aileen Jordan said: “We’re excited to have reached yet another milestone with the arrival of these two trains, and with them the opportunity for our drivers and onboard crews to use these for training ahead of Azuma coming into service from later this year.”

The operator plans to introduce Class 800/801 trains from November, with ten in traffic by March next year. Four are currently in the UK for testing, with nine-car bi-mode 800101 joined recently on the main line by five-car electric multiple units 801101/102.

Nine-car bi-mode 800103 and nine-car EMU 801201 are also at Doncaster, but have yet to be released onto the main line under their own power. HRE is also using 800003/004 for pantograph and signal testing on the East Coast Main Line, but these are eventually destined for Great Western Railway. All test trains on the main line are currently crewed by GB Railfreight, but VTEC staff training will start in the spring.