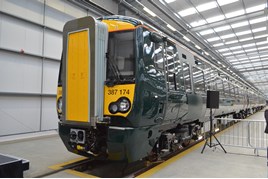 The final Electrostar vehicle has been completed by Bombardier at Derby Litchurch Lane.

And Driving Motor Composite Open (DMCO) 421174 is the 2,805th and final Electrostar coach. The first coaches were delivered to c2c in 1999, since when they have been used by 12 companies, including in South Africa.

Beckett said of the Electrostars: “It’s a bit sad to see it go, but it is making way for something that will have a similar input in the future.”
Great Western Railway is the final recipient of Electrostars. It has 45 on order, of which only two have still to be delivered from Derby.