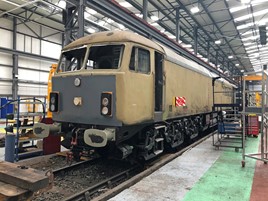 GB Railfreight has announced that testing of the first Class 69s should begin on the Severn Valley Railway in January, with the locomotives entering traffic later in the year.

Ten Class 56s are being converted into ‘69s’ by Progress Rail at its Longport facility, near Stoke-on-Trent. They are required to meet GBRf’s growing portfolio.

Speaking exclusively to RAIL, GBRf Engineering Director Bob Tiller said that work was under way on seven locomotives, with three more to follow. The contract includes an option for a further six if required.

The idea to re-engine Class 56s, which were built in 1976-84, first surfaced just after the Trainload freight companies set up just before privatisation (Loadhaul, Mainline and Transrail) were acquired by Wisconsin Central to create what became English, Welsh & Scottish Railways (EWS). The Americans looked to upgrade existing British Rail fleets (such as the ‘56s’) before instead ordering 250 Class 66s, so no design was ever taken forward.

Tiller explained: “We need motive power. Luckily I have been able to find Class 66s abroad.”

The ‘56’ owes its heritage to several classes, including ‘37s’, ‘47s’ and ‘50s’, while its electronic controls were similar to those used on High Speed Train Class 43 power cars. However, the ‘56’ was often extremely difficult to maintain, with its power unit requiring excessive fuel consumption.

The plan to rebuild ‘56s’ as ‘69s’ was based on the need to improve emissions, to save costs through improved fuel economy, and to have a reliable locomotive while also enabling GBRf to encourage a standardisation across its fleet.

Tiller said the conversion work is much more in-depth than when Brush Traction rebuilt Class 47s as ‘57s’, or the rebuild of ‘73s’ (which, along with fitting MTU engines to HST power cars, was also one of his projects).

He explained: “It’s not quite as easy as it sounds. The cooler group is proven from an EMD GT42AC locomotive, the alternator is from a one-metre GP40 locomotive, and the electrical cubicle was specifically designed for the Class 69 project to fit within the Class 56 bodyshell.

“The cab inside is all new - the Brush controls have gone and it’s much more similar now to a ‘66’. We have kept the curved Class 47-style desk, but other than that it’s very Americanised. The front end has been redesigned and all the draughts have now gone.

“The ‘56’ bogies, wheelsets and traction motors have all been overhauled to a very high standard.

“One of the problems the ‘56s’ had was when accelerating from a stand, the fourth powered wheel would invariably raise up and suffer wheel spin, due to weight shift. So we have fitted a better traction control system, which should make it more controllable.”

Tiller added that the braking system has also survived from the ‘56’: “If we had changed that, it would have needed a much bigger redesign, so we have kept the D&M system throughout as well as upgrading all the in-cab safety systems to latest versions - for example, TPWS4.”

The cost of all this remains lower than buying brand new locomotives. Also, there is currently nothing available that meets one of the main criteria - standardisation. Where possible, GBRf wants its additional locomotives to be similar to the Class 66 that has proven so successful for the business.

“We looked at ways of enhancing the GBRf fleet, but keeping as much standardisation with the Class 66 as possible,” said Tiller, who added that because GBRf has a ten-year maintenance contract with Progress Rail, it made sense for the companies to work together to address the issue.

Class 56s, ‘47s’ and ‘60s’ were considered for re-engining and rebuilding, but the difference was that the ‘56s’ were available straightaway. They were acquired from UK Rail Leasing, which had several examples stored at its Leicester depot.

“With the assistance of UKRL Engineering Director Alan Lee, I looked at several designs that could work with the locomotives,” said Tiller.

“We looked at fitting a twin-engine Caterpillar design, an MTU V16 engine or even two Cummins engines, before settling on the EMD12N-710. These are what’s fitted in a Class 66, and these are ten brand new engines.”

Despite the engines being brand new 3A emissions-compliant, they are still of a design that had been discontinued due to emissions regulations imposed on the industry. This meant that GBRf 66779 Evening Star, which arrived in the UK in 2016, was the final brand new ‘66’ to be built for this market.

However, GBRf was able to prove that their emissions were an improvement on what had been in the locomotive previously. Furthermore, because the Class 56 retains Grandfather Rights on the network, the approval process is a lot quicker.

Retaining the main structure, weights, bogies, motors and drawgear enables GBRf to retain the track dynamics and rail interface of a Class 56, and thus the project can be classified as an upgrade.

“These are a very clever design by being able to shoe-horn everything into a UK design, with the work carried out here in the UK,” said Tiller.

Longer-term, should GBRf want to buy brand new locomotives, these would have to meet Stage 5 emissions rulings. Currently there is nothing available that would fit into the UK loading gauge.

Currently, bodyshells are being transported from Longport to nearby Marcroft Engineering, which is shot blasting them and preparing them for eventual painting. The bogies are being overhauled by Pullman Rail at Cardiff Canton. When the finished ‘56’ bodyshell returns to Progress Rail, the conversion begins.

Donor locomotives are chosen on account of what works. A locomotive may have been stored for many years, or in the case of 56128 even been sold to a scrap merchant. But provided its bogies and traction equipment can be salvaged, then it can be rebuilt.

As for the progress of the project, it has been delayed only by the COVID-19 pandemic - including lockdowns in the United States.

Said Tiller: “We should press the button to start 69001 soon, and then it will begin load bank testing at Longport. After that, in the first week of January, it should go to the Severn Valley.”

GBRf will work on getting 69001 type-tested, but once it has completed its stint at the SVR it will move to Eastleigh Works, where it will join 69002, with Arlington Fleet Services contracted to repaint the ten locomotives.

The first to be released is likely to be 69002 in corporate GBRf colours, with the pioneer released in a livery designed to represent the partnership between the operator and Progress Rail. After that the plan is to release one locomotive a month from Longport.

The Class 56s were bought outright by GBRf. But as with the Class 60 fleet, the operator has completed a sale/leaseback deal, in this instance with Progress Rail (the first time the manufacturer has leased locomotives in the UK).

Once in traffic, the locomotives will be used on general purpose duties rather than being dedicated to any particular flow, although it’s likely they will be based in one part of the country for ease of maintenance and driver knowledge. Tiller declined to comment where.

With a need to have assets in place ahead of new contracts (despite the pandemic), combined with the lack of anything available ‘off-the-shelf’ that would not need a lengthy approval process, upcycling redundant British Rail-designed locomotives makes sense for GBRf.

“These are nearly Class 66s in ‘56’ clothing,” concluded Tiller.

New interior cab with additional noise and comfort additions, and power controller pedestal as per Class 66.