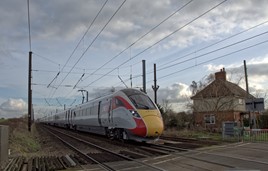 LNER Azumas have been granted approval to operate on the East Coast Main Line in passenger service.

In a letter to Hitachi Rail Europe (seen by RAIL), the Office of Rail and Road lays out a number of terms and agreements that must be resolved within a specified timeframe.

These include that before entering traffic, Automatic Selective Door Opening (ASDO) must be proven on the ECML on operational routes where they will be used. European Train Control System (ETCS) must not be enabled other than to support functionality.

The trains have been assessed and passed for 125mph running, and can run in either five, nine or ten-car formations. They will run initially between London King’s Cross and Leeds/Hull.

Regarding the inter-car connectors that prevented authorisation last year (RAIL 863), sources suggest Hitachi will make the engineering modifications to the LNER fleet within a year of authorisation.