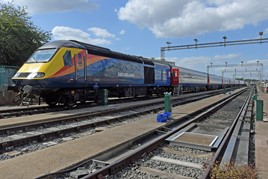 The catering vehicles from the GC sets were replaced by vehicles sent off-lease by Great Western Railway. Three Trailer First Mk 3s have also been converted to Trailer Standard coaches, with 41201-203 now 42584-586 respectively.

LORAM is carrying out at the work at Etches Park, with SNC-Lavalin and DG Design also involved. All three are based at Derby.

“These trains are being upgraded and improved to match the standard of the rest of our main line fleet,” said EMT Fleet Director Chris Wright.

EMT said the average weekly mileage for the six-coach sets is 2,200 miles, and that they have better acceleration than the HSTs leased from Porterbrook because they are shorter (and therefore weigh less).

HSTs can only operate on the Midland Main Line until the end of next year before needing to be withdrawn, as they currently do not meet disability access requirements.