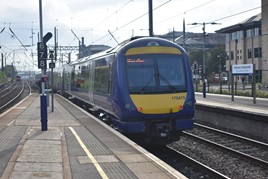 The first Class 170s to be used by East Midlands Railway should enter service in late spring 2020, the operator has told RAIL.

Nine Class 156s at Greater Anglia are also due to move to EMR by the end of this year, having been replaced by Stadler Class 755s.

Additionally, ScotRail 156503 has moved south to EMR on loan until the end of year, while the latter’s Class 158s undergo refurbishment.