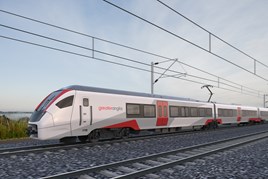 The design for the new Stadler trains for Greater Anglia has been finalised, following consultation with more than 1,000 people.

It was ‘locked down’ at the end of June after stakeholders visited mock-ups of the interior at Norwich Crown Point (RAIL 829). The interior featured designs for the main line, regional and Stansted Express trains being built in Switzerland, and which enter traffic in 2019.

GA said “constructive suggestions” were made regarding aspects of seating, signage and labelling, as well as the marking out of the cycle area.

Meanwhile, an online public consultation into the Bombardier-built Aventras, which will be used on commuter operations, has generated comments regarding seat design, provision of seat back tables, seat alignment to windows, and signage around areas with tip-up seats or cycle areas. All will help to shape the final design, which will be signed off in November.

GA Franchise and Programmes Director Mike Kean said: “Our priority for the new trains was to involve the public and stakeholders fully in the design process, and we are pleased that this extensive consultation process has resulted in so much useful feedback which will inform and shape the final design.”
GA is spending £1.4 billion on 169 trains that will deliver 1,043 new vehicles, enabling the operator to replace every existing vehicle in its fleet.