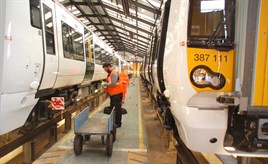 Four Class 387/1s have so far completed their mileage accumulation and have been accepted by Govia Thameslink Railway.

They will enter traffic in December, with the new 110mph Electrostars gradually replacing the GTR Class 319s in January. GTR spokesman Roger Perkins told RAIL that “the entire Class 387/1 fleet will be in service for the May 2015 timetable change.”

Currently 387105-387108 are at Brighton Lovers Walk, having completed testing. It is planned to deliver one Class 387 to Brighton each week. They will be based at Lovers Walk depot until they leave GTR.