Dartmouth '25' to star at SDR gala 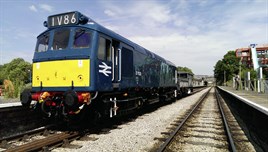 Class 25 D7535 (25185) will make its first trip away from its Dartmouth Steam Railway home when it stars at the South Devon Railway’s diesel gala on November 7-9.
The Type 2 has been based at Dartmouth since February 1986, but will make the short journey by road to operate alongside classmate D7612 (25901), which is based at the SDR.
The DSR ‘25’ is maintained for its owners by the Devon Diesel Society, which is also based at the SDR. Earlier this year, it underwent body repairs and a repaint into early British Rail blue livery with small yellow panel.

CAPTION: The Dartmouth Steam Railway’s Class 25 D7535 will haul its first trains away from the DSR since arriving there in February 1986, when it appears at the South Devon Railway’s diesel gala. On June 6, the ‘25’ stands at Goodrington Sands with a demonstration freight. SEBASTIAN HAMBLY.

Preserved 50026 Indomitable has become the first of its class to haul a passenger train at the North Norfolk Railway.