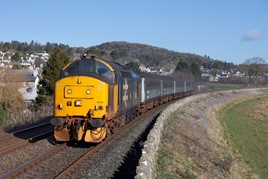 A senior leader at Barrow Borough Council has blasted the “unreliable” Class 37/4 diesel locomotives that operate a limited number of passenger services on the Cumbrian Coast line for diminishing the line’s appeal for commuters.

Speaking exclusively to RAIL, Brendan Sweeney, Vice Chair of Barrow Borough Council, said the ‘37s’ – which have been operated for Northern by Direct Rail Services (DRS) along with a rake of Mk2 coaches and a Driving Brake Standard Open (DBSO) since 2015 owing to late cascades of DMUs from other parts of the country – have “been a disaster”.

At present, DRS has a contract to provide Northern with two sets of locomotives and carriages until January 6 2019.

“The ‘37s’ are definitely putting people off from using the railways. One of the biggest local users is the commuter traffic to Sellafield from Barrow,” Sweeney told RAIL. “Around 550 people travel and they have the alternative of by going by car. Previously the problem was overcrowding, but it isn’t an issue anymore because the ‘37s’ are so unreliable and unpopular.”

He added: “They weren’t a bad idea in that they’ve been running successfully on freight with DRS on the nuclear trains, but they were never designed for stop-start working.”

He also complained about the noise of the locomotives: “The other issue we’ve had is the noise of the damn things. Because of the reliability issues, the first service is at 0543 with the ‘37s’ from Barrow with DRS starting them up an hour and a half before that. Plus there’s the exhaust fumes; it’s like having a vintage car that doesn’t need its MOT. The railway is hiding behind very old legislation, back from the days of steam, which prevents environmental health people putting any pressure on them to improve things.”

“It’s unacceptable what people have to live with it in Barrow. On the first working day after Christmas they started up at five past midnight because they had been stood for several days. That’s not on at all.”

Sweeney welcomed the extra reliabilty the newer locomotives would bring to the Cumbrian Coast line, but pointed out it would come at the expense of a coach in order for the rake to fit in station platforms and called on Northern/DRS to provide more clarity: “It is not clear how long the ‘68s’ will be with us and if, or when, we will see Barrow free of the ‘37s’,” he told RAIL. “Topping and tailing is clearly very wasteful of locos and fuel, as they are hauling 85 tonnes of dead weight. “I wish we could have upgraded DBSOs paired with ‘68s’ on both sets.”