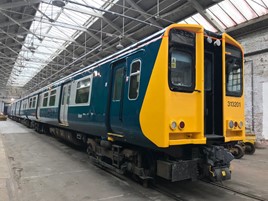 Govia Thameslink Railway and Beacon Rail have repainted 313201, the UK’s first-ever second-generation electric multiple unit, into British Rail blue and grey. Slight changes have been made to accommodate tonal contrast on doors, to meet accessibility requirements.

Built by BREL at York, the three-car EMU was released in 1976. Originally numbered 313001, it was initially used on the Great Northern electrified route from Moorgate. It now operates on the Coastway route.

The repaint was part of its C6 overhaul, which included work on its doors, air system and interior, as well as bodywork repairs. Its interior now meets accessibility guidelines.

Beacon Rail Director of Engineering Haydn Vaughan said: “We wanted to celebrate the heritage of this special train, so the re-livery made perfect sense.”