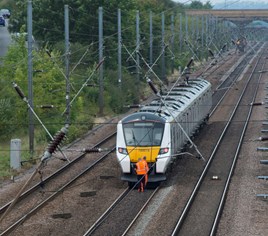 Class 700s will enter traffic on the Great Northern in the next few weeks.

Govia Thameslink Railway told RAIL this was planned for the autumn, although many factors could alter the introduction date. RAIL understands the ‘700s’ will enter service from October 2.

Early next year, eight eight-car Class 700/0s will replace ‘365s’ on the GN. Beyond that, details have yet to be confirmed. Once the Class 700s are introduced, GTR intends to retain 19 of the 40 Class 365s, with the rest destined to be returned to Eversholt Rail Group.

When Thameslink is fully ‘live’ from December 2018, Class 700s will run from Cambridge and Peterborough onto the former Southern Region via the Canal Tunnels and the ‘core’ between St Pancras International and Blackfriars.