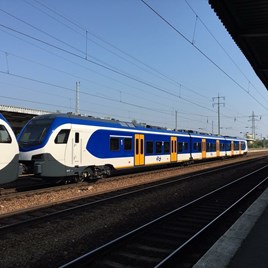 Six brand new trains at a time will be under test on Abellio East Anglia’s network, when delivery of the new vehicles begins.

Abellio Greater Anglia Managing Director Jamie Burles, who will lead the new Greater Anglia franchise that is due to start on October 16, told the East Anglia Rail Summit at Westminster on September 7 that one of the key elements regarding the order for 1,043 new vehicles from Bombardier and Stadler was that they could be delivered quickly.

“We wanted new trains in as soon as possible. They start coming in in 2019 -that’s pretty quick,” he said.

“We need them for a massive timetable change in May 2019, so we needed a proven platform and we couldn’t afford to wait.”