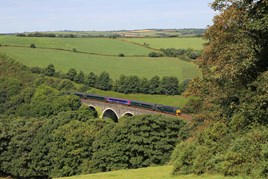 Up to three locomotive-hauled trains will enter traffic with Great Western Railway (GWR) next May, running between Cardiff and Taunton.

They will be used to replace Class 150 and ‘153’ diesel multiple units that are being sent north for use by Northern in time for the May timetable.

An Invitation to Tender (ITT) has been issued. The locomotive-hauled coaching stock (LHCS) must be formed of up to four carriages, and the ITT specifies that they will run between May and December 2017, but that there could be a change in October. There is the possibility that the trains could run for more than that seven-month period.