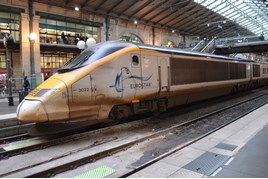 Eurostar is to send the first of its 186mph Class 373 trains for scrap after just 22 years in service. The 18-car trains will be scrapped by European Metal Recycling (EMR) at Kingsbury. The first train was due to move to EMR’s Midlands site as RAIL went to press.

East Midlands Railway is to spend more than £400,000 upgrading and refreshing all 12 stations along the Cleethorpes-Barton-on-Humber branch.