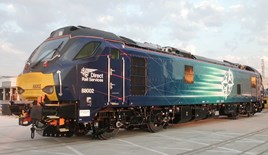 The first complete Class 88 for Direct Rail Services has been unveiled by the operator.

Three of the dual-mode locomotives have so far been completed by Stadler at its Valencia factory in Spain, with ten on order.

Testing of the first locomotive (88001) has been completed at Velim in the Czech Republic, while the second locomotive (88002) will be the first delivered to the UK and is expected to arrive this month. The third (88003) will be displayed at the international trade fair Innotrans in Berlin on September 20-23, before being sent to the UK.

DRS said that the ‘88’ offers “superior traction equipment for UK operation, which will result in a step change for delivery of freight and passenger services”. The locomotives are a development of the Class 68 platform, and feature both 25kV and diesel operations.