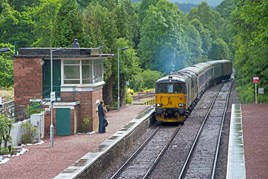 Caledonian Sleeper is no longer using Class 67s on its trains from Edinburgh Waverley to the Highlands, because sufficient rebuilt Class 73/9s are now available for these duties.

The deal to hire the locomotives ended on June 30.

CS hires its traction from GB Railfreight. The Class 73/9s had been scheduled to start in April last year, when CS took over Sleeper operations from First ScotRail. However, they were delayed due to various complications with the rebuild, and so GBRf hired the ‘67s’ from DB as a stopgap. ScotRail had used the Class 67s prior to the end of the franchise.

GBRf will use Class 73s on trains to and from Fort William and Aberdeen, while a Class 66/73 combination will be used on the Inverness train. The Class 73 is provided on that train for electric train supply, as the ‘66’ is not so equipped.