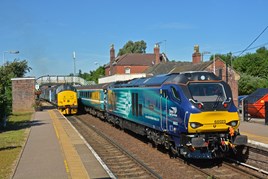 Driver training using Class 68s began on July 2, ahead of their introduction into traffic on Abellio Greater Anglia passenger duties between Norwich, Great Yarmouth and Lowestoft.

Direct Rail Services is supplying two Class 68s, three Mk 2f carriages and drivers to operate a second locomotive-hauled train set (RAIL 804). The DRS drivers will replace AGA drivers, and following the completion of training the ‘68s’ were due to enter traffic in mid-July. They are required as cover for a three-car Class 170/2 damaged in a level crossing accident near Thetford in April.