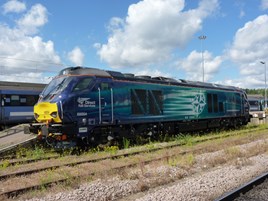 A second locomotive-hauled set is to be introduced in East Anglia.

Abellio Greater Anglia will hire two Class 68s and three Mk 2s from Direct Rail Services on a daily basis until the end of its franchise in October.

The second LHCS will cover for a three-car Class 170 damaged in a level crossing accident near Thetford in April (RAIL 799). Repairs have not yet begun on the DMU (170204), which is expected to be out of traffic for several months. It remains at Norwich Crown Point although contracts for its repair are being negotiated.

The second LHCS set will be a ‘hot spare’, but is nevertheless earmarked for daily use. It is understood that rostered duties have been planned for the set, which will be crewed by DRS drivers. The carriages will be Riviera Trains air-conditioned Mk 2s hired by DRS in a similar arrangement to those used by ScotRail.