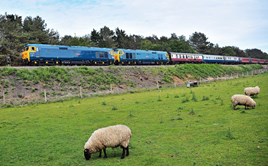 Boden Rail Engineering Ltd D400 (50050) Fearless and D407 (50007) visited Swanage on June 11, with a charter from Derby that used the newly-acquired section of line connecting the heritage railway with Network Rail.

Organised by Pathfinder Tours and operated by GB Railfreight, this was the first main line Class 50 tour since July 2012 when 50044 Exeter failed on a GBRf charity charter. The two BREL '50s' were the pair that hauled the final charter on March 26 1994 from London Waterloo-Penzance-London Paddington before British Rail withdrew the class.

Wareham to Swanage service postponed to 2023

A regular service connecting the Swanage Railway with South Western Railway trains has been postponed again.