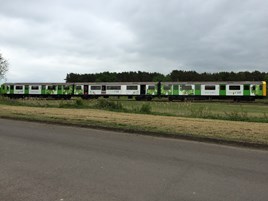 Vivarail’s prototype Class 230 D-Train is now running as a three-car unit. Both driving cars are fully powered and the four gensets are running successfully. Apart from interior fit-out of the trailer car, the rest of the train is complete.

Currently, the prototype is the only train that will be built until an order is placed for operational units.

“We continue in discussions with London Midland and are ready to start building new trains for them as and when an order is placed,” Vivarail spokesman Alice Gillman told RAIL.