Great Northern Class 700s to operate from next year 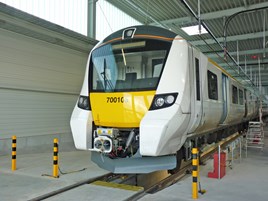 Class 700s will begin running on the Great Northern network from next year.

Manufacturer Siemens said on June 3 that the trains would run between London King’s Cross and Peterborough and Cambridge from 2017. Then, from 2018, they will run from Cambridgeshire onto the Thameslink network, using the Canal Tunnel that links the East Coast Main Line with the TL network at St Pancras International.

Currently the Cambridge and Peterborough routes are operated by Class 317s, ‘321s’ and ‘365s’. Govia Thameslink Railway operates these services, but plans to dispense with the ‘317s’ and ‘321s’.

Class 377 Electrostars will begin running on the GN network from October, replacing the British Rail-era electric multiple units. In the longer term, Class 387/1s will also be used on GTR trains on the ECML, making use of their 110mph capabilities.