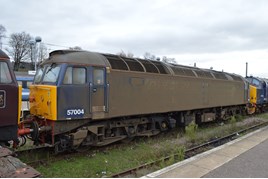 A further three DRS Class 57/0s (57010-012) are stored at Crewe Gresty Bridge, and are also likely to move to Longtown. These have also been out of traffic since December after being employed on RHTTs. Class 57/0s are used mainly on those duties, rather than other DRS work.

DRS has 57002 undergoing overhaul at Railway Vehicle Engineering Ltd’s Derby facility, while 57003 and 57007 remain in traffic.