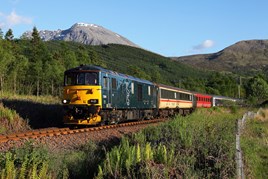 Caledonian Sleeper has five of its six Class 73/9s now available for traffic in Scotland.

May 27 was also the first day that all three CS routes used the rebuilt electro-diesels on the same day, when four ‘73/9s’ were in action on Sleeper trains to Aberdeen, Fort William and Inverness.

73966 and 73969 were used on the Edinburgh-Inverness portion of the Caledonian Sleeper, while 73967 worked to Aberdeen and 73968 hauled the Fort William portion.