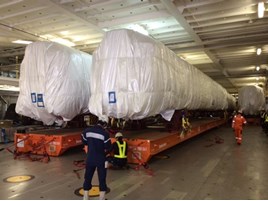 Five Class 385 bodyshells are due to arrive in the UK this month, while in Japan the first completed ‘385’ is undergoing testing.

Hitachi Rail Europe (HRE) is building 70 electric multiple units for ScotRail that will enter traffic next year. The next six are being built in Kasado (Japan), and the remaining 63 will be assembled in HRE’s Newton Aycliffe facility near Darlington.

The five bodyshells on their way to the UK are first production trains, and will be used to form three-car trains (a sixth bodyshell will follow). They were shipped from Kobe.

Meanwhile at Kasado the first four-car ‘385’ is undergoing testing before being shipped to the UK later in the year. HRE is building a further three four-car trains and two three-car trains in Japan, and these will be undergoing testing soon before moving to the UK. All HRE-built trains - and bodyshells bound for Newton Aycliffe - will be shipped to Teesport for onward road movement. This is the same method as for the Class 800/801 Intercity Express Programme trains.