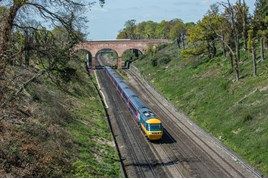 Great Western Railway’s plans to repaint a full rake of Mk 3s in blue and grey, to match 43002 Sir Kenneth Grange, were scuppered by the need to comply with Disability Discrimination Act (DDA) rules.

The High Speed Train Class 43 power car was unveiled in the blue and yellow ‘Flying Banana’ livery carried by HST power cars in their early careers (following the delivery of the ‘43s’ from 1976).

The repaint was carried out by GWR to celebrate the 40th anniversary of the HST (RAIL 800). However, many observers had asked why a full rake of stock was not repainted to match the ‘43’. HST stock was delivered in blue and grey livery when built.

GWR spokesman Dan Panes said that GWR had investigated the possibility, but because the livery would not have been authentic, the operator decided not to repaint a rake of stock.

Under DDA rules, doors must be a different colour scheme to that of the main bodyside, so that they are distinguishable to passengers with visibility problems.