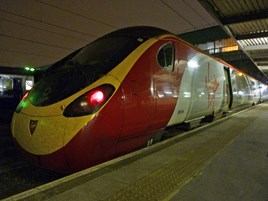 Alstom has completed the overhaul of 56 Class 390 Pendolinos. It is the fourth time that 52 of the 56-strong fleet have undergone a heavy overhaul.

The company, which built and maintains the trains, built a new bogie overhaul facility at its Manchester site to carry out the work. It says this dramatically reduced the time required to overhaul each train - using the equipment either a nine-car train (which has 18 bogies) or an 11-car train (22 bogies) could be completed in five days.

Overall, 26 bogies could be overhauled per five-day cycle, enabling Alstom to reduce the total overhaul time of the entire train to seven days.

In total, 574 vehicles were overhauled. This included 3,629 interior and exterior doors and 1,148 bogies. The bogies were washed and stripped (and overhauled), with the wheelsets, gearboxes, drop links, yaw dampers and other associated components exchanged.

Additional to the overhaul, 4,100 modules were replaced across the fleet and 2.3 million consumables replaced.