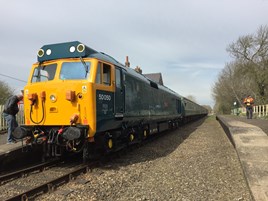 Pioneer D400 hauled its first train in 16 years at the Mid-Norfolk Railway diesel gala on April 1.

The Class 50 was one of three owned by Boden Rail Engineering Ltd that attended the event, along with 50007Hercules and 50017 Royal Oak.

BREL’s three Class 50s operated solo and in pairs, and all three hauled the 1800 Dereham-Wymondham Abbey on April 2.

The pioneer, which also carries its TOPS number (50050) and name (Fearless), was bought by BREL last year, and returned to action earlier this year following a thorough restoration by BREL (RAIL 797).

Its last train had been on September 19 1999 - a London Liverpool Street-Norwich and return train that it hauled when hired by Anglia Railways.